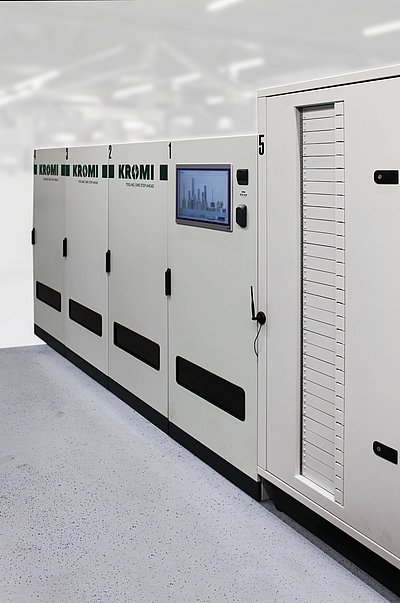 With the introduction of a spiral cabinet and a control panel, the history of what has probably been the most successful tool management concept in the machining sector began more than 20 years ago at the automotive supplier Car Top Systems CTS in Hamburg. Originally designed primarily as an automatic dispenser for indexable inserts, there was a growing desire over the years to integrate other articles into KROMI's complete supply system.
Following the initial integration of the KROMI Kanban system with its standard drawer cabinets, an electronic drawer cabinet was incorporated in 2011 for the first time in order to adopt large tools into the supply system as well. Individual, lockable compartments inside a drawer gave customers access to an extended range of articles.

The control panel remained almost unchanged for a long time and therefore became the typical and distinctive feature of the KROMI Tool Center. Although it remained unchanged on the outside, progress inside didn't stop developing. From the CRT monitor to the flat screen monitor, from the keyboard and mouse as input media to the touch screen, from the PC to the thin network client, the rapid advances in communication technology took place inside the respective housing or enclosure practically unnoticed by the user.

At EMO 2017, KROMI unveiled a new solution as a complete replacement for its classic KTC control panel. With the drawer cabinet including PC called the Tool Server Module TSM by the manufacturer, all KTC modules were now able to be controlled via the well-proven KROMI user interface.

At AMB 2018 a further innovation in the KTC automatic tool dispensers was presented. A cabinet module was adapted and fitted with a rotating carousel magazine so as to be able to economically stock tools in smaller quantities. With more than 700 individual compartments, the module offers enough space for a wide range of variants in small quantities. It can even handle individual indexable insert returns.

At EMO 2019, KROMI is now presenting a completely modular cabinet concept for the decentralised supply of manufacturing areas. In addition to the proven cabinet modules KTC-HX (Helix), KTC-KS (Carousel) and KTC-ES (Drawer), the new KTC module concept now offers an even more flexible integration of the MMI display including the software.